A web series being shot in SSPS has become the talk of the Town.
Today a press conference was hosted in school campus where the Founder Principal Ms.Nalini Arora thanked the producer and the director of the web series for choosing Moradabad as their shooting location which not only gave an opportunity to the local talent to get recognised at national & international level but also to promote a strong social message of gender equality.
She thanked the media fraternity for being a great support.
The cast & crew members were introduced to the media including the famous actor Mr.SHAHBAZ KHAN who expressed his delight to work at such a nice place.
The Director & Producer have expressed their willingness to shoot more of web series in the city in coming future. 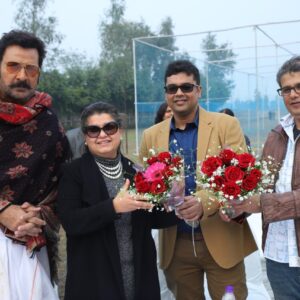 Class III,Theme: Say NO to Plastic